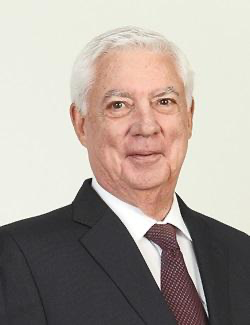 Richard L. Downer, CD, FCA, a former senior partner of PricewaterhouseCoopers (PwC) in Jamaica, in charge of corporate finance advisory services, is currently a member of the boards of directors, chairing audit committees, and Mentor of listed companies, in the financial, tourism, pharmaceutical distribution, and technology industries. He has also served on several other private sector boards in the financial sector, beverage industry, real estate development and construction industries.

In the public sector, Mr. Downer has served as Chair of the Coffee Industry Board and as a director of the Bank of Jamaica, as well as government entities involved in tourism and education. As Executive Director of the decision support unit in the Prime Minister’s office, he was involved in tax reform, investment promotion and monitoring aspects of the economy and he initiated privatization through IPOs of large state enterprises.

Mr. Downer was appointed Agent of the Minister of Finance for the Temporary Management of several troubled financial institutions and has advised the governments of sixteen countries in the Middle East, the Far East and the Indian subcontinent, Africa, Eastern Europe and Russia on privatization policy and transactions. Since retirement from PwC he was the Senior Adviser to a private equity firm in London, England and on the Rating Committee of a rating agency that rates sovereigns and large corporates in the Region. He has been a director of the American Chamber of Commerce, Vice president of the Institute of Chartered Accountants, director of the Public Accountancy Board and the Conference Board of Jamaica and Honorary Treasurer of the Private Sector Organization of Jamaica.

Mr. Downer qualified as a Chartered Accountant in Canada and is a Fellow of the Institute of Chartered Accountants of Jamaica which conferred on him its Distinguished Member award and he was inducted into the Munro College Hall of Fame. He was made Commander of the Order of Distinction by Jamaica for services to accountancy and being a pioneer in privatization.